No, I don't have your drabbles yet.

jaina  , yours has turned into a birthday-Pr0ntober-Christmas-Merry IchiRukiness Day piece so expect it late. Happy Birthday,

andrew_jp  , thank you for killing Nnoitra for us this Halloween season--next year, just tell me who you want dead and I'll write an epic piece for you.

Bleach fans everywhere are expecting the HM arc to wrap up soon (I'm not) so in lieu of anything truly creative, I put together a picspam. Someone grumbled today, "Were the past forty chapters worth it?" Let's see... the plot didn't progress that much, but Tesla is cute.

C'mon, admit. Some parts were awesome. Rukia killed an Espada, Orihime slapped Ulquiorra like she was Scarlett o Hara and he was Rhett Butler, Ishida looked very hot with a sword, Halibel had this whole harem of babes, and Aizen looked bitchin cool at the tea party.

In fact, that relationship was great, wasn't it? Not quite on level of Ishida/Pesh but there was something heartwarming about the way our big lug Renji put up with that ... whatever Don is. Renji got to make a lot of faces like this one:

So handsome. He got the size of his kidou balls made fun of by Ishida but then he also got to have stimulating repartee in this arc with Don:

I enjoyed a lot of this slooooow-paced arc. Really. I did. I won't deny it. Did I mention Ishida looked hot with a sword?

Kubo drew faces so well. His artstyle sky rocketed even as his narrative abilities got lost in all those panels. Sometimes I think he was just dwelling on the pretty. Orihime was SO pretty:

But Szayel was prettier, doncha think?

I would say that Szayel made the whole arc for me, but that would be lauding the froth when the real punch was the Rukia story. It was the one with the calories, suspense, poignancy, surprises. I don't know about you, but I cried like a baby once during the Bleach story and it wasn't during SS. Oh, Rukia, you're so awesome.

There were lots of fights. Didn't it seem like there were an AWFUL lot of fights in this arc to you? I mean, I know this is a fighting manga, but dude.... Ishida defeated two opponents before he even met Szayel (that was last Spring... geez... the longest fight ever--I seriously doubt it will be over soon... maybe by Uryuu's birthday day... probably not). A lot of the fights in this arc put me to sleep--I appreciated the whole comictragic grandeur of Doldoni but zzzzzzzzzz. Ichigo fights never have inspired me--I'm always weeping for them to be over with.

This was me for most of Ichigo's HM fighting:

Pesh could almost see her panties.

Cirucci was fun, but then came Szayel who dismissed her as "that whore" and truly, she couldn't compare to His Butterfly Highness. Even before he went Szayelina, one had to love his faggy charm:

He didn't swing that way for Renji, though. I'll never get over how Renji was so macho about it all.

That's okay, the romantic chemistry between Renji and Ishida was there instead. I must say that as a RenIshi shipper from way back, I gots treated something good.

Uh, sorry, got carried away there. I loves the RenIshi.

Mustn't forget the moment that made the fangirls faint. There was never so much squeeing heard since Jin lost his glasses and half his clothes and emerged like this glorious newborn  bish from the waters in Samurai Champloo.

There were lots of sexy transformations this arc, but Ulqui didn't even need to release to out-sex them all.

Gotta give Szayel the prize for effort, though. I'll never forget how gratified he looked after his first taste of Fornicarius:

Oh, I just loved him. A villain who likes to play with dolls!

He even appeared to want to buttfuck his dolly with his fingernail.

Yes, the HM arc was perverted. My scorpio self appreciated that so much. I mean, it was PERVERTED. When Szayel wasn't deep-throating things, Nel was spitting them out. 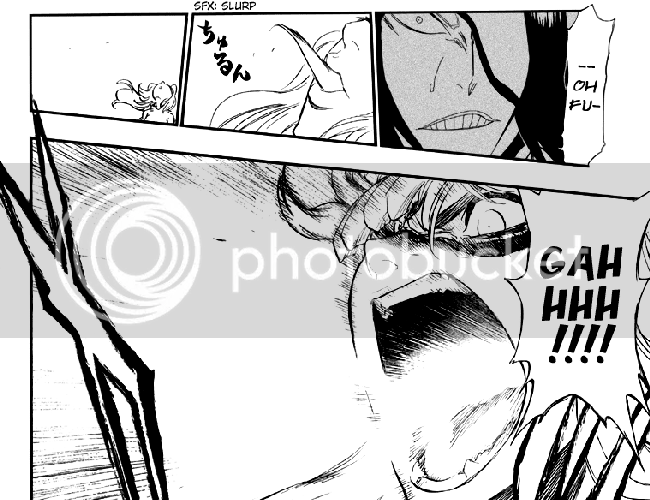