Have some singing Szayel and a couple strong opinions

In this post you will find:
1. A link to download the latest Bleach Beat collection featuring the incomparable Toriumi Kousuke as Szayel Aporro Grantz grooving your petri dishes, rocking your test tube racks and blinding you with science.
2. An explanation to clear things up once and for all: THE NEWS OF SZAYEL'S DEATH IS GREATLY EXAGGERATED
3. An answer to why, if I shipped IchiOri, chapter 313 would make me throw in the towel

ETA:
with thanks to Spacecat and Dana of Bleach Asylum for translations.

Lyrics from inside the cover:

GOOD! I found you! 握る生命
GOD deserted you! ソソる叫号
God bless to you! 軋む生存
Goodbye! Thanks you! CONTROL YOU!

GOOD! I found you! 握る精神
GOD deserted you! ソソる恐察
God bless to you! 軋む生能
Goodbye! Thanks you! CONTROL YOU!

You say, hate me. Please.
All over the world.
I say, bad joke. Bye.
All recorded… You.

You say, hate me. Please.
All over the world.
I can smile for you.
All remember… You.

2. The news of Szayel's death has been greatly exaggerated.....

Okay, it's getting more than a little annoying to us Szayel fans when people keep saying the guy's dead. Not only did Kubo make it plain that this Espada is teh jesus and is destined to rise again, but please, let's reread the manga people and realize what Mayuri did to Szayel. At no point was it ever made clear that Mayuri's zanpakutou pierced Szayel's heart. HAD THE ZANPAKUTOU DONE SO, there would have been the risk, never mind Szayel's poisoned altered state of consciousness, that he would simply impregnate the nearest cutie pie and be born again....

Remember? Ishida went "hey! Your blade is broken!" and Kubo went to the trouble of showing us that, in fact, Szayel was NOT DEAD.

but methinks Mayuri didn't want the bastard to die; he wanted Szayel to THINK he was gonna die; Mayuri wanted Szayel to suffer eternal torment.
Look closer. Szayel is still waiting for his death.

This is how Kubo leaves him. Not dead. In eternal suffering. Can't say that this isn't what the bastard deserved, but can't say that we're not going to see him again. Yes, Mayuri has access to Szayel's secrets now and Szayel's lab. But Szayel didn't get the farewell Arrancar flashback that Nnoi and others did. I do not believe his time is up.

His time is his suffering and if he comes out of this he's only going to come out of it crazier than ever! (I can't wait)

I don't gloat often. Honest, I don't. Tell me--except for a few boats of fangirly incoherence which I've always chided myself for, haven't I always been a model of diplomacy and temperance when it comes to shipping debate and haven't I campaigned for getting the nyah-nyahs out of the sport? I've written my shipping essays with self-deprecating humor, right? Okay, well, some of you thought I was a total snot, but the TRUE REASON, stated in intros and here and around those three authorial intent essays for my writing them was that chapter 237, Orihime's confession and the subsequent focus on her and Ichigo in the Hueco Mundo arc put the fear of termites in the temple of IchiRuki and I wanted to REASSURE everybody--hey, no worries, this is par for the course, this is the author playing and making stuff interesting and developing Orihime's character, but look close---there's still IchiRuki there. And my point in those essays was that there was no IchiOri happening in HM.  But I had the huevos to admit the threat to the ship, right? KUBO WROTE IT.

Well, now, Ichigo and Orihime have been separated once again, and I must say: Wow. If I'd been shipping those two, I'd've been really disappointed with their interactions this arc. No meaningful conversations--no time alone--there was Orihime's being afraid of Ichigo and cheering him on lamely (only at Nel's goading) and the manga-ka didn't linger on panels the way he could've. In fact he went out of his way to have Grimmjow, Nel, Kenpachi, and the random noises of battle blur the two, whereas when Ichigo and Rukia were featured, other characters fell away and the focus was on Ichigo and Rukia alone.

When Orihime was taken away by Ulquiorra , she had one of the most touching farewell scenes EVER but too bad Ichigo was unconscious and didn't witness her leaving. When Rukia was taken to SS by Byakuya and Renji, there was mutual angst. There was mutual grief. EYE CONTACT, baby, and irony.  "I'll never forgive you"  turns some chapters later into  "the man I keep in my heart."  There's a suggestion of "forever" there. It's a forever that has an emotional maturity and resonance that "I'd love the same guy five lifetimes" doesn't match, imv.

So, here in chapter 313, we have a chance for Ichigo to witness Orihime being taken away from him, and what do we get? He didn't cry out "Inoue!" Note the size of his one reaction panel. Note that he said "THEY disappeared" and he didn't just concentrate on Inoue. Note that his separation was preceded by comedy and then Stark rushed in, slam, bam, goodbye, thx, versus the several PAGES of angst we had when Rukia was taken. Look.  Here is Ichigo's big reaction to Orihime's being taken away (and mind you, this follows his having to be told by Kenpachi to take the girl out of here and leave--Ichigo wanted to stay and fight)

Rukia's capture? I can't even post all the pages! But there was this reaction, that horrible anguished cry: 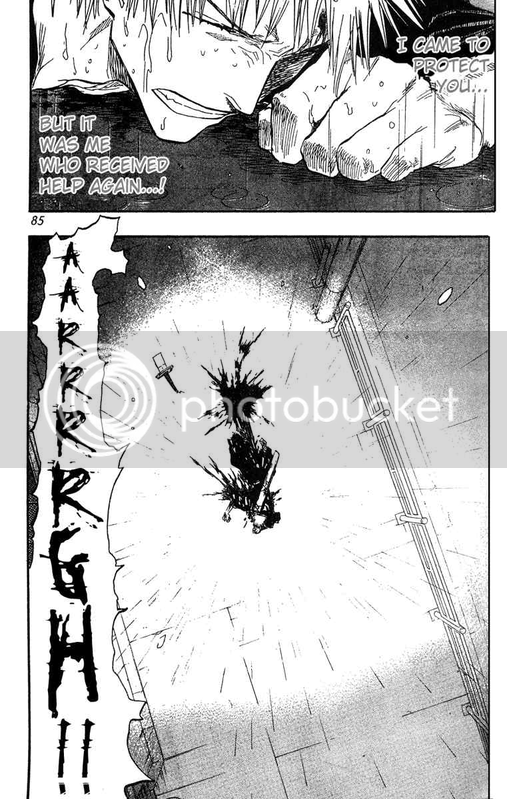 And then that black page:

Re-read the chapters to  see how empty Ichigo's life was following that scene. How much do you want to bet that we're going to get action-zoom-plot and very little angst next week over Orihime's sudden re-kidnapping? Methinks the invasion of Karakura will take more notice.

Reunions, likewise separations, are important, in terms of how Kubo treats them.

The FIRST IchiRuki reunion on the bridge. No dialogue necessary. Kubo "illustrating the air"
as he says he does when characters take precedence over plot.

Let me gloat.  I may still be wrong, and if I am, I will be humble and apologize and eat my many hats and say "ok, I was dumb and you were right" but today a young, insecure IchiRuki shipper in the BA FC needed coddling and this is what I wrote her:

The word is that Ichi and Ruki can't have a meaningful reunion if Orihime is gone again and their hearts are heavy over her being in danger. Think for a minute. WHAT? When have Ichigo and Rukia NOT had a meaningful reunion? Danger or no danger, grievous pain or no pain, the spirit body of Ichigo's mother cast aside by Grand Fisher or a giant flaming bird heading to execute Rukia? Kubo-sensei takes time and care to make all interactions between Ichigo and Rukia meaningful. Please. Note the separation scene between Ichigo and Rukia at the bridge when she was taken by Byakuya and Renji to SS. The tears, the rain, the black full page of despair. The lingering on the despair. Note Orihime's being snatched from Ichigo in this chapter. Whoops, see ya later, a charming Stark goes bye bye, and like Annie said, Ichigo doesn't scream INOUE! he just goes "they disappeared!" I LOL-ed. The previous scene with Kenpachi had been so funny and that's the mood I was in. There was no romance, no connection--this wasn't IchiOri. Not at all. I can't call the plot. I don't know what Kubo's got up his sleeve. All I know is that when he puts Ichigo and Rukia together again sparks will fly. SOLAR FLARES will fly. Supernova waves of nuclear energy will radiate. Yeah. Even if it's for a panel or two. Has he ever let us down before? Trust in Kubo-sensei.